Mama, I Want the Black That You Are

Written and Directed by Arthur Molepo
Produced by Mpho Molepo
Molepo Theatre Projects in association with Nkgo Ya Metsi presents ‘Mama, I Want the Black That You Are’. Supported by Departments of Social development and Arts and Culture for a National Schools Tour.

‘Mama, I Want the Black That You Are’ is a theatre production focused on the lives of people dealing with the prejudice affecting those with Albinism.

It is the compelling tale of a family with a dark past. The script is based on interviews with real people with Albinism. This foundation gives the story heart, intensity, depth and direction. Matlakala, the central character, is a 15-year-old teenager living with Albinism. Her mother, Anna is a loving, caring woman married to Ike. Ike, a successful professional, is the stepfather of our heroine. Two other characters, also with Albinism, appear as Matlakala’s alter-egos. They represent the conflict in Matlakala’s head. She is haunted by a life of abuse and the secrets she has to keep from everyone, including her mother.

As the background to the play, it is revealed that Anna, as a young unmarried woman, gave birth to an Albino child. Prompted by traditional beliefs and taboos Anna was forced to give up her beloved baby to be killed by the elders. She is grief stricken.

A similar scene plays out on a rubbish dump nearby. Muti-hunters kill the mother and Anna rescues the baby, its umbilical cord still around its neck, and without a word to anyone, flees with her to raise her as her own. The baby is Matlakala. We meet the two 15 years later, when Anna is married and living a ‘normal’ life. It is Ike’s greed and discomfort with his stepdaughter’s condition that sets in motion a series of tragic events. Myths and beliefs pepper the production, drawing attention to the challenges that people living with Albinism and their families have to face.

“ There is a serious need for us to use the arts especially theatre  to educate our people about  albinism , we need to halt the scourge of brutal murders of  our fellows brothers and sister are living with albinism, it is quite sad that in this day and age albino people are treated as endangered species in our democratic country.” Says Mr. Mpho “ Fats Molepo the producer of Mama.

NB: The production will be touring nine provinces, performed at approximately 15 schools per province in different regions. We therefore request merchandise sponsorship, that we can donate to the schools, e.g. skin products, sanitary towels and food parcels.

Prices: Donations – skin products, sanitary towels and Non perishable foodstuffs to be donated at schools around the country were the production will be performed. 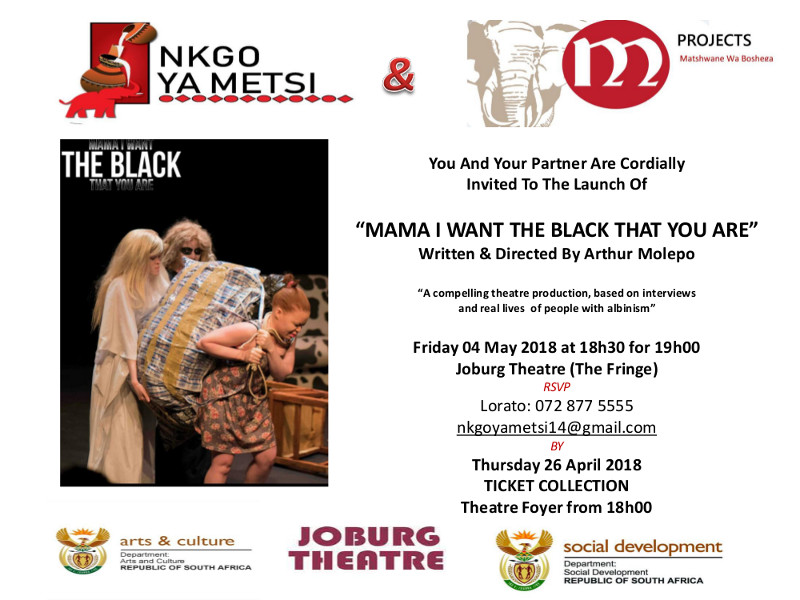